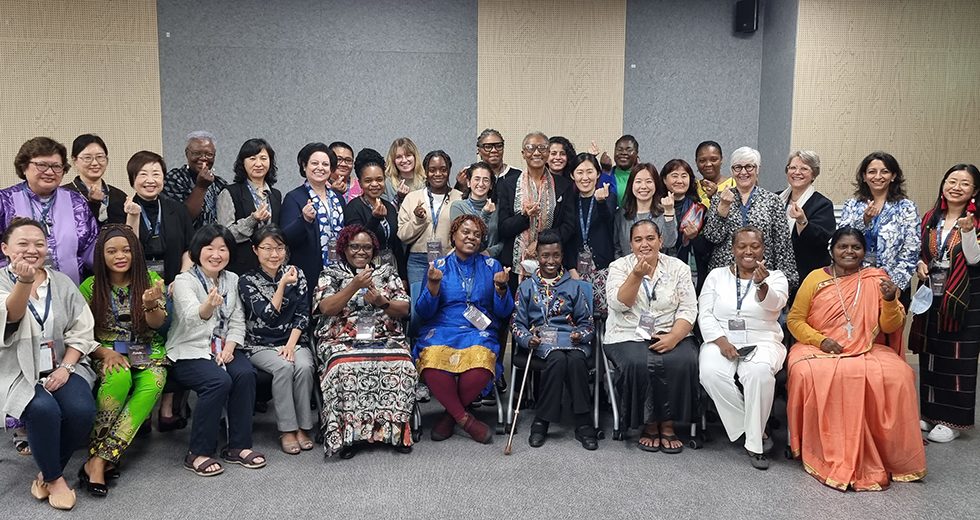 A “Women in Leadership Roundtable,” a joint initiative by the World Communion of Reformed Churches (WCRC) and Council for World Mission (CWM), brought together nearly three dozen women from more than 20 countries.

Meeting under the theme, “A Journey of Honouring, Lamenting, and Rejoicing,” it was a time of mutual sharing, solidarity, advocacy, and reflection for women navigating patriarchal contexts.

“We chose this theme because it’s important to honour women as leaders, but we could also not forget the pain that women face, especially in the transitional time of leadership between men and women,” said Najla Kassab, WCRC president, “We hope this was a time of strengthening, of envisioning, of sharing, and of looking forward to a better tomorrow.”

Kassab and Lydia Neshangwe, CWM moderator, both women from the Global South, initiated the project together.

“We’re very excited about the roundtable because both our organizations preach coming together, working together, witnessing together, and now we’re practicing what we preach by coming together to do all those things as women in leadership,” said Neshangwe. “As women we want to preach a message of collaboration, not competition.”

The pair had discerned the need for a space for current women leaders along with emerging female leaders to support each other and engage with the issue of gender justice. In recent years, more women are in key leadership positions including in global ecumenical bodies, enabling the promotion and continuity of this missional agenda. With a long history of engagement on the issue of gender justice, this programme is part of both organizations’ continued commitment to this cause.

Aruna Gnanadason, former director of the World Council of Churches’ program on Women in Church and Society, delivered the keynote address.

This was followed by an exposure visit to Korea Peace Now! Women Mobilizing to End the War, a global campaign to educate, organize, and advocate for a Korea peace agreement. The participants discussed white imperialism, peacemaking models, and making grassroots connections after watching Crossings, a film about a group of female peacemakers crossing the Korean border.

The women also gathered for worship, and Bible studies on biblical women such as Ruth, Naomi, Mary, and Miriam based on the themes “lamenting with our sisters” and “rejoicing for our daughters.” The event also integrated group spaces for sharing, time with their contexts, and papers from notable women activists, theologians, and ecumenists.

It was also a time for vision and imagination as they deliberated on what it means to be a female leader; important qualities that should be upheld; empowering and mentoring young women as the next generation of leaders; their areas and understanding of power; and lastly, how the ecumenical world should benefit from the divine gifts of women created in God’s image.

(Adapted from an original article by CWM.)