Call to prayer and support for Beirut 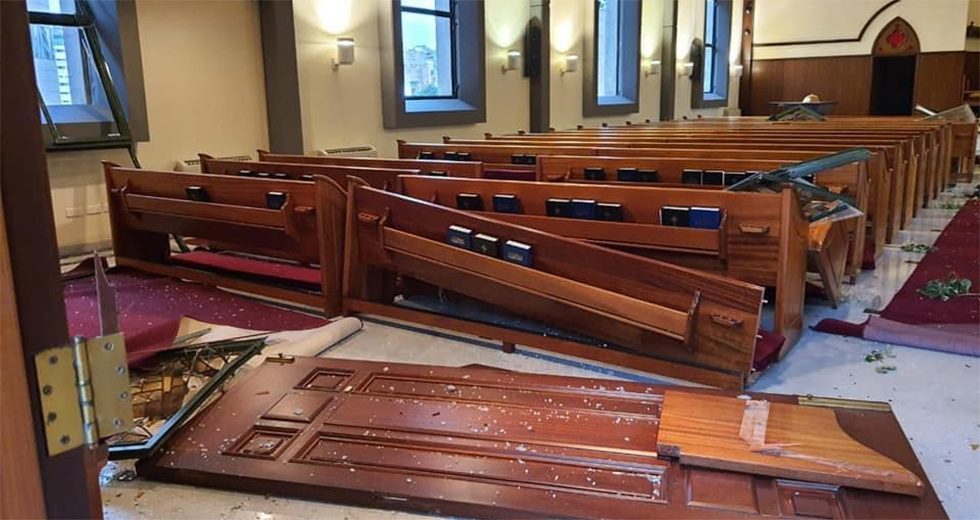 We are afflicted in every way, but not crushed; perplexed, but not driven to despair; persecuted, but not forsaken; struck down, but not destroyed; always carrying in the body the death of Jesus, so that the life of Jesus may also be made visible in our bodies. — 2 Corinthians 4:8-10

The World Communion of Reformed Churches (WCRC) calls on its member churches to pray for all those who have been impacted by the explosion in Beirut’s port on 4 August and to provide support as they are able.

The blast, which Lebanon President Michel Aoun said was caused by 2,750 tonnes of ammonium nitrate, killed at least 100 people and injured more than 4,000, damaging much of Beirut.

The damage has included buildings of member churches, including the National Evangelical Church of Beirut, where the WCRC Executive Committee held its opening worship service in 2015. The church’s windows were destroyed, doors were blown off their hinges, and several ceilings collapsed.

Habib Badr, senior pastor of the church, had just left his office when the ceiling there collapsed due to the explosion. “The damage and destruction is incredible … just incredible! Now pray for us. It’s a very serious development,” he said.

WCRC President Najla Kassab, who also works for the National Evangelical Synod of Syria and Lebanon, reported that church buildings and homes were damaged, with windows and doors blown out. “Many Lebanese were not able to sleep in their homes and some found their homes in rubble,” she said.

The Near East School of Theology (NEST) also suffered extensive damage. “Never has NEST been hit so badly as yesterday, not even during the worst days of the 15-year war in Lebanon. Of course, we are not the only ones. The devastation in the rest of Beirut is vast,” said George Sabra, president of NEST.

According to the BBC, “The explosion comes at a sensitive time for Lebanon. With COVID-19 infections on the rise, hospitals were already struggling to cope. Now, they are faced with treating thousands of injured people. The country is also going through an economic crisis. Lebanon imports most of its food and large quantities of grain stored in the port have been destroyed causing fears of widespread food insecurity to come.”

“Living in the Middle East has taught us the art of continuing, of hoping and trusting that our Lord is with us on the journey,” said Kassab. “Every day is a new day. Today we decide to remain hopeful and continue to stand up against hopelessness.”

“We continue to hope for peace, for a better tomorrow, and for strength on the journey,” she said. “Our main concern is to preserve the dignity of the people and be able to hear their cry and commit ourselves and resources to make a difference.”

Lebanon will observe an official period of mourning for three days from Wednesday.

(Evangelische Mission in Solidarität (EMS) contributed to this report; image courtesy of the National Evangelical Church of Beirut.)