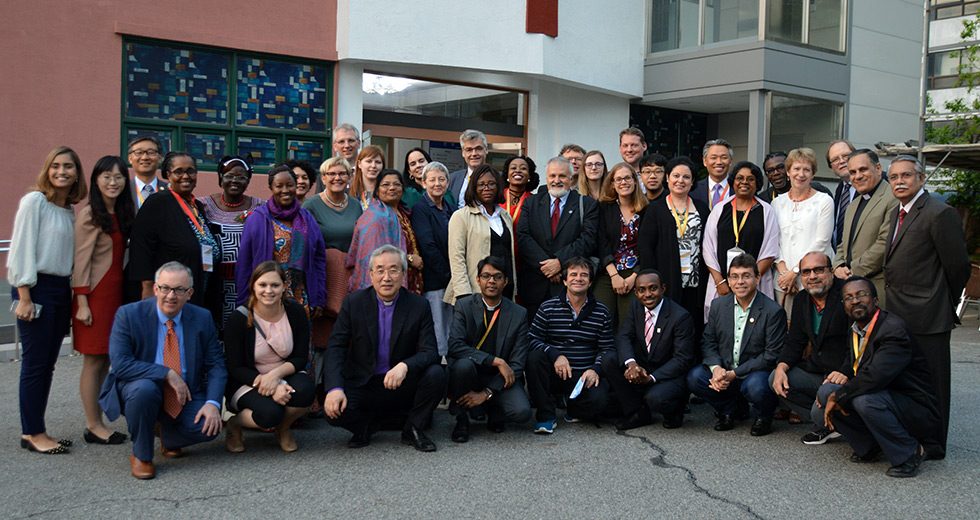 The Executive Committee of the World Communion of Reformed Churches (WCRC) adopted a strategic plan to guide the work and witness of the organization through 2024.

The approved strategic plan includes a new vision statement, an overarching goal, numerous objectives to reach the goal and structures to implement the plan.

“The 2017 General Council entrusted us with a big number of actions, concerns and challenges. Prioritizing and setting a timetable is vital for our success and progress,” said President Najla Kassab. The Council, meeting under the theme, “Living God, renew and transform us,” passed 72 actions, calling the Communion to engage in numerous activities throughout the world.

In order to prioritize and effectively direct the organization’s work the WCRC officers began a strategic planning process in December 2017. Based on the actions and spirit of the General Council the creation of the plan included the participation of people from around the world, providing input through numerous “working groups” on specific issues and a “Mission and Vision: Widening the Circle” consultation, which raised voices that are outside the traditional centers of power.

“The process itself was an exercise in communion strengthening and commitment to justice,” said Chris Ferguson, WCRC general secretary. “The Widening the Circle consultation already pushed us forward with our tasks of critical theological reflection and ‘reforming’ our life as a communion so that all voices are heard and power imbalances are redressed.”

The proposed strategic plan was presented to the Executive Committee by Rev. Rathnakara Sadananda, the general secretary of the Church of South India and moderator of the Strategic Planning Committee.

“This is a good plan that captures dreams and aspirations of the Reformed family, as well as the directions set by the General Council,” he said. “It sincerely attempts to strive towards a realistic goal that will both strengthen the Communion and engage us more deeply with the Word and world.”

The Executive Committee reviewed the proposal through a discernment process, making several modifications, before adopting the plan.

The Vision Statement set forth in the plan is:

The World Communion of Reformed Churches is called to communion and is committed to justice.

Through robust engagement with the Word of God and the call of the Holy Spirit, it is always being transformed as it strives for the full and just participation of all. In our diversity, we seek to be a living expression of “unity of the Spirit in the bond of peace” (Ephesians 4:3).

We work to renew and restore the economy and the earth, so that all humanity and the whole of creation might live life in its fullness (Deuteronomy 30:19; John 10:10).

The overarching goal is:

By 2024, the World Communion of Reformed Churches will strive to be significantly strengthened and increasingly effective in living out God’s call to communion and commitment to justice. As a global Koinonia, we are marked by discerning, confessing, witnessing and being reformed together.

The World Communion of Reformed Churches, with all the partners God provides, serves its member churches and also works for the transformation of the whole world, which is so loved by God but still trapped by multiple injustices and death, having fallen among thieves (John 10:10).

As it strives to fulfil its vision, the World Communion of Reformed Churches works through two strategic trajectories:

These strategic trajectories are applied through five interlocking dimensions:

“This goal clearly shows that we will continue to work through five key areas,” said Ferguson, “and that all we do will strengthen and deepen our Communion even as we engage in important work in this world so loved by God but fallen among thieves.”