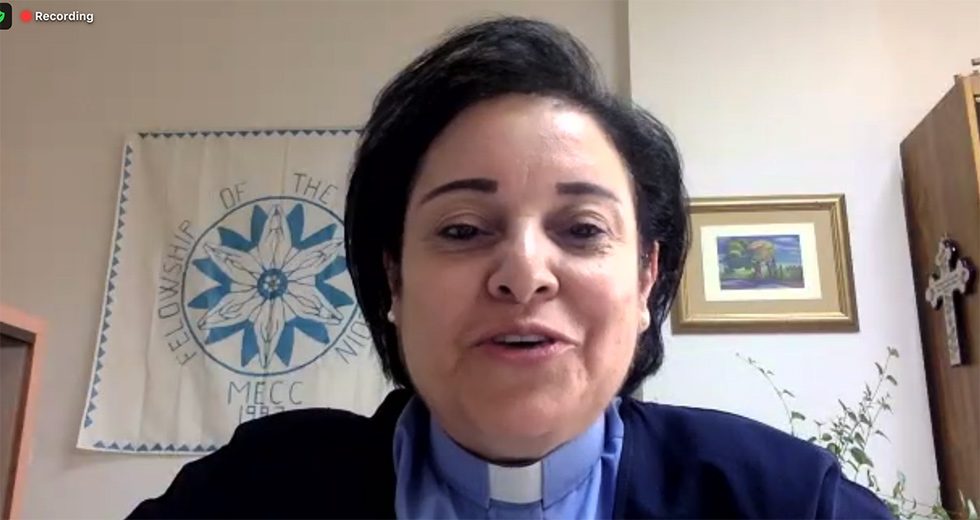 In her address to the Executive Committee, President Najla Kassab cited the Wittenberg Witness to call for a “renewed imagination” to build “a strong Communion, a prophetic one, an impactful presence in every place that hurts.”

“A renewed imagination for transition” took into account several factors: the end of General Secretary Chris Ferguson’s term on 31 August, the lack of a proposed candidate to succeed him as general secretary, and concerns over the financial sustainability of the WCRC’s core budget.

A proposal for a one-year interim period with the three executive secretaries acting as a “collegial general secretariat” was put forth—and will be presented in detail on Tuesday for consideration. Kassab said of it, “The interim period will allow a new model of shared responsibility where the involvement of the officers, executive members, and regional leaders will be vital. This will allow a stronger participation from the regions and more involvement from the Communion churches and leaders in sustaining the transitional model. We look forward to the interim model which hopefully will allow new participation and new imagination in building a stronger communion.”

“A renewed imagination for confessing” focused on the “COVID and Beyond” discernment process “where the Communion is striving to establish a renewed and refreshed theological understanding of the current crisis, through a wide discernment process on the present crisis and to provide for a prophetic theological response to move towards a confessing Communion,” said Kassab.

“We are challenged today to work towards a new imagination on how we will sustain the work of the Communion,” she said. “Sustainability is an expression of commitment, relations, ownership, and deepened communion. Sustainability is at the heart of strengthening the communion as a goal.” Later in the week, the Executive Committee will discuss a specific proposal to establish a task group on sustainability.

“One of the essential roles that the Communion calls for is inviting the marginalized to the table of the Communion,” said Kassab, when addressing a “renewed imagination for inclusion.”

“At a time of distancing the world is challenged with how to mend the distancing culture. We are challenged to renew our imagination in inviting all those who are distanced and to continue dealing with the injustices that have lasted too long,” she said.

She noted that the WCRC has been a pioneer for gender justice but more work needs to be done, especially in the hiring of a female executive secretary, for which some funds have already been raised.

“The corona pandemic revealed the fragility of human life and the need of new spiritualities that interpret our Reformed theology into contemporary Christian witness; encouraging the renewal of Christian worship and spiritual life within the Reformed tradition; renewing a commitment to partnership in God’s mission through worship, witness, diaconal service, and work for justice, working towards mission renewal, and mission empowerment and cooperation in ministry,” she said.

“Strengthening the regional work remains at the heart of renewed imagination,” Kassab said. “The General Council reaffirmed the importance of the regions within the WCRC, and their pivotal role in strengthening communion between the churches by providing spaces for dialogue and action; and in programmatic work to enhance the participation of the churches from all regions affirming working styles that strengthen the synergy between the local, regional, and global levels.”

The WCRC Executive Committee is gathering virtually through Zoom 25-28 May for four hours each day, with members spanning 16 time zones.

The Wittenberg Witness is an agreement signed between the WCRC and the Lutheran World Federation at the 2017 General Council.