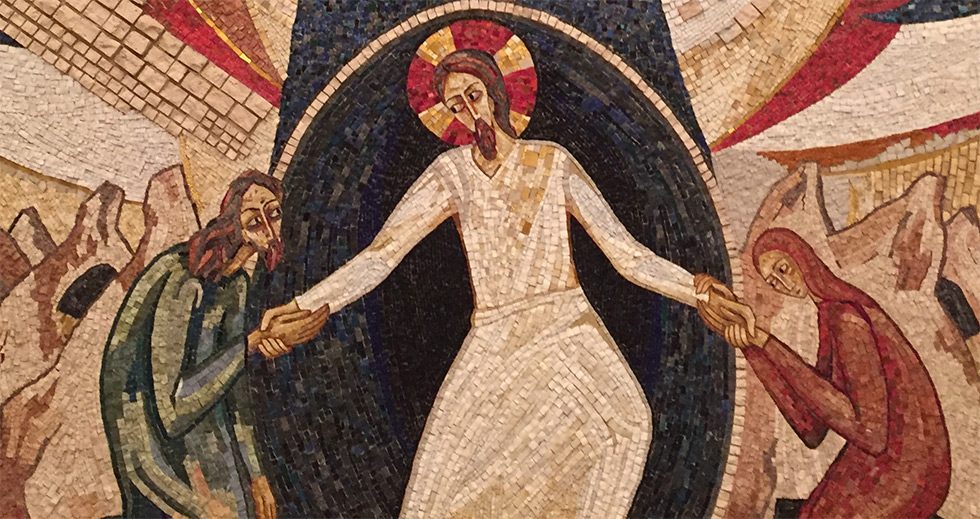 “If the foundations are destroyed, what can the righteous do?” —Psalm 11:3 (NRSV)

The beginning of the Psalm speaks dramatically to our context as everything is falling apart for the Psalmist. There is a danger and social disintegration and wars and violence on all sides. The Psalmist’s friends and supporters say, Now is the time to get out of here, flee to the mountains, the danger is too great. And instead the Psalmist answers, When the very foundations are destroyed, ruined, when everything we count on falls apart, what are the righteous to do? What is the response of those who seek to follow the way of God in a situation where all the premises have disintegrated?

In our context, we see the culmination of several years of making evident which we have seen coming for a long, long time. Very many of the foundation stones of our civilization—the way trade happens, the way the economy is run, the way that nations negotiate with nations, the premises of values and respects for human rights, even the conduct of war itself, whether there are limits to aggressions and violence—all now are up for grabs. The rule book is thrown out of the window, those who flaunt violence are rewarded and those who are trying to maintain a semblance of the old order are in fact turned into its victims.

We see now the situation ever more dramatically whether it is about climate change, relationships between nations, the growing inequality, spread of violence—the foundations themselves are being destroyed. Not only are difficult things happening, but they are happening to us in a way that indicates that the old rules are no longer working. Part of the answer of the Psalmist, of course, is that we can’t flee the situation. There is no simply saving ourselves in the midst of such a situation. The righteous are called to be present.

We are called to enter the situation that finds itself, whether it is our current situation of serious geopolitical tensions, poverty, climate change, a factor where people are being destroyed and the earth as well, requires us not to flee, as the archer takes aim, according to the words of the Psalmist, but to show up. The righteous make themselves present in the midst of the turmoil and the destruction. We don’t simply try to rebuild what was lost, but we try to answer directly and quickly to the call.

Now in biblical terms, we are addressed with an Easter passage. In fact we can take the whole book of the Gospel of Mark as being a story that is a long lead up to the passion story. And people have often noticed that the context of the Gospel of Mark is war, destruction, where the foundations are shaking and the rules no longer seem to hold, where there is fear and mistrust. At the same time throughout the Gospel one of the most used words is “immediately,” particularly in terms of Jesus’ actions. “Immediately” not only in the sense of in a timely fashion but “directly,” not letting anything distract from the goal, that when something happens it is immediately addressed, whether through healing, through prophetic denunciation, through actions, through movement.

In this Easter moment, in the midst of all that perplexes us, we are called to act immediately, directly. The righteous find themselves called to the resurrection moment, to apply to what is happening. In the resurrection story in Mark’s gospel, the encounters with the messengers and later with the Risen Christ are always direct: Go and tell the disciples. Go to Galilee where Jesus is already waiting for you. Go to the graveside. Go and address the pain, the loss and the destruction. The hope is in the immediate making ourselves present to that which challenges the very idea that there are firm foundations. The righteous follow the God who is acting to bring about justice and reconciliation as the very foundations fall.

We see our member churches in Aleppo, Syria, acting to show up in a place of destruction, where literally the foundations have been bombed into ruins. We see in Colombia churches who have been confronting a peace process which is now disintegrating, refusing to see the foundations crumbling as the last word. But they instead continue to witness, following the God of Life for peace, following Jesus’ own ministry of reconciliation. We see in the most difficult of times in faces with climate change, school children rising up and even though the very foundations of ecological justice are being abandoned will not take no for an answer. They show up.

Even as the foundations crumble we see the members of Christ’s church rising up, hearing the resurrection call and bringing hope. When the foundations are destroyed, the righteous follow the God of Life to defend life empowered by the Holy Spirit.