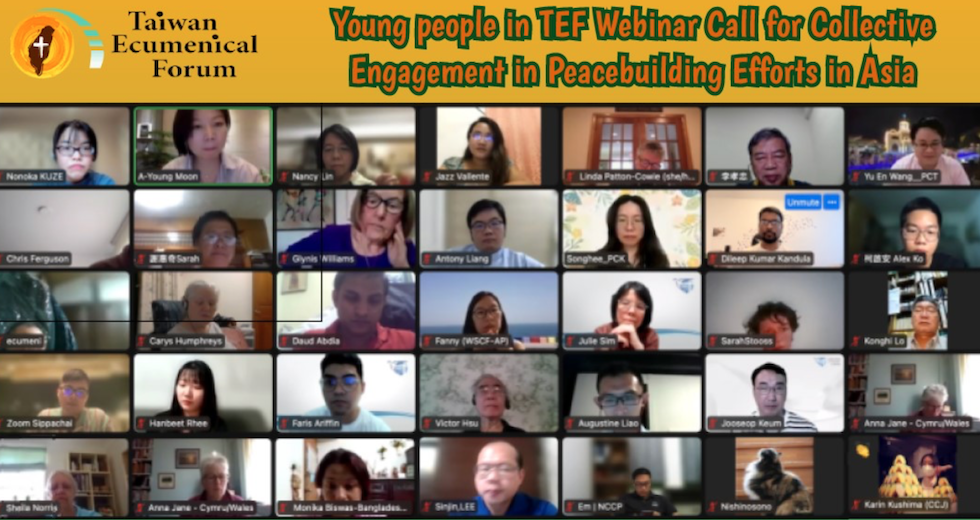 The Taiwan Ecumenical Forum held a Youth Webinar on Tuesday, 26 April, with the theme, “The Neo-Cold War: The Resurgence of the Geopolitics of Global Empires in (North) East Asia.” Over 80 participants from around the world participated, collectively discerned, and engaged in conversations with four young panelists from Japan, Taiwan, South Korea, and Thailand.

The president of the Swiss Evangelical Reformed Church EKS, Rita Famos, received Joseph Kassab, president of the Nationaal Evangelical Synod of Syria and Lebanon, accompanied by the director of the Lebanese Evangelical NGO Compassion Protestant Society, Fadi Riachi. The focus of the conversation was the idea of solidarity.

In 1994 the Uniting Church in Australia entered into a Covenant with the Uniting Aboriginal and Islander Christian Congress. The Covenanting Statement acknowledged past wrongs and made a new commitment to the relationship, and to working together towards a more just church and nation. On Friday, 6 May, at the beginning of the reconvened meeting of the 16th Assembly, there will be a renewing of the covenant. Uniting Church President Sharon Hollis said the act is both a confession and a celebration.

Working for justice has been at the center of the theological agenda of the Latin American Bible University (UBL) in Costa Rica for many years. “The impacts of climate change are being felt most strongly in communities that have been left vulnerable to social and economic forces, compounding the injustices that already exist,” said Karla Ann Koll, Director of the Chair of Theological Studies at UBL. “The climate crisis requires that our theological work and biblical interpretation denounce those responsible for harming God’s creation and encourage faith communities to take action to protect the environment.”

The United Reformed Church is celebrating a significant milestone: All 12 Synods in England and Wales have now signed up to become an “Eco Synod.”

Christian Krieger, president of the Conference of European Churches, visited western Ukraine in April, where he met with Bishop Pavlo Shvarts of the German Evangelical Lutheran Church of Ukraine as well as other Ukrainian church leaders, including Bishop Sándor Zán Fábián of the Reformed Church in Transcarpathia, responding to humanitarian and spiritual needs.