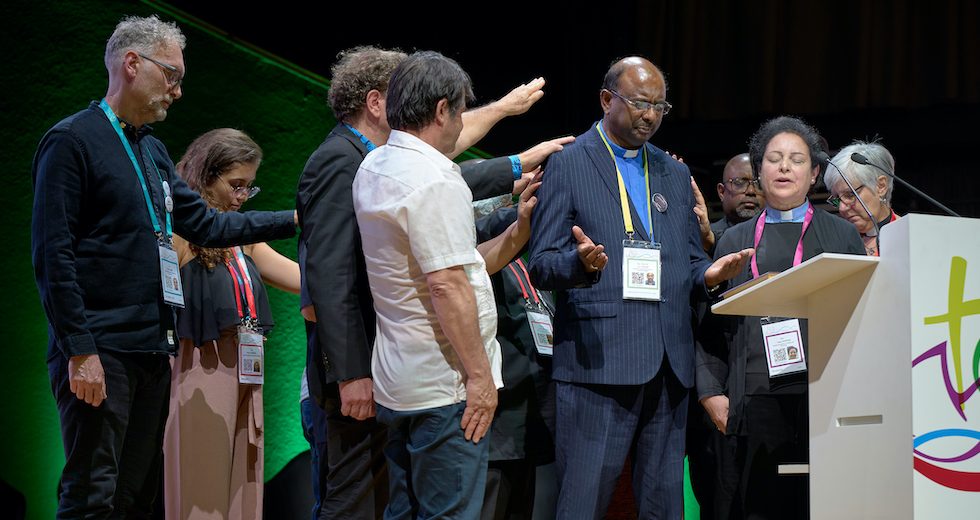 “The Communion is alive and active,” said Philip Vinod Peacock, executive for justice and witness as part of the Collegial General Secretariat (CGS). He presented the WCRC’s upcoming activities to the several hundred people gathered, also noting that the next General Council will be held in 2025 in Thailand.

Hanns Lessing, acting general secretary as part of the CGS, moderated the sharing session, which took most of the 90-minute gathering. More than twenty people spoke, raising a host of concerns, including:

The meeting concluded with a commissioning ceremony for Pillay, a former WCRC president who will become the next WCC general secretary in January 2023.

Najla Kassab, WCRC president, presented Pillay with a Bible, noting that especially as Reformed Christians, all of what we do begins with the Word.

“You will not be able to succeed without having the Word of God lead you,” she said. “Use the Word of God to speak, to challenge, to create a new envisioning in the life of the church.”

WCRC global and regional leaders, as well as Lungile Mpetsheni, general secretary of Pillay’s home church, laid hands on Pillay as Kassab said a prayer of blessing: “May you equip him with wisdom and grant him your strength as he works with the churches towards unity and healing, witnessing to a broken world.” Those gathered then collectively recited a litany of commissioning based on Philippians 4:8.

Pillay admitted that he felt “overcome and overwhelmed” by this act of support and encouragement. He pledged to continue to partner as much as possible with other ecumenical organizations, including the WCRC, and to take seriously the sorts of concerns voiced in the meeting.

Pillay served as WCRC president from 2010 to 2017. He is an ordained minister in the Uniting Presbyterian Church in Southern Africa and is currently a professor of theology and dean of the faculty of theology and religion at the University of Pretoria.

The 11th Assembly of the World Council of Churches is being held in Karlsruhe, Germany, from 31 August to 8 September, under the theme “Christ’s Love Moves the World to Reconciliation and Unity.”

The Collegial General Secretariat (CGS) is composed of the WCRC’s three executive secretaries, collectively sharing the constitutionally-mandated responsibilities of the general secretary.