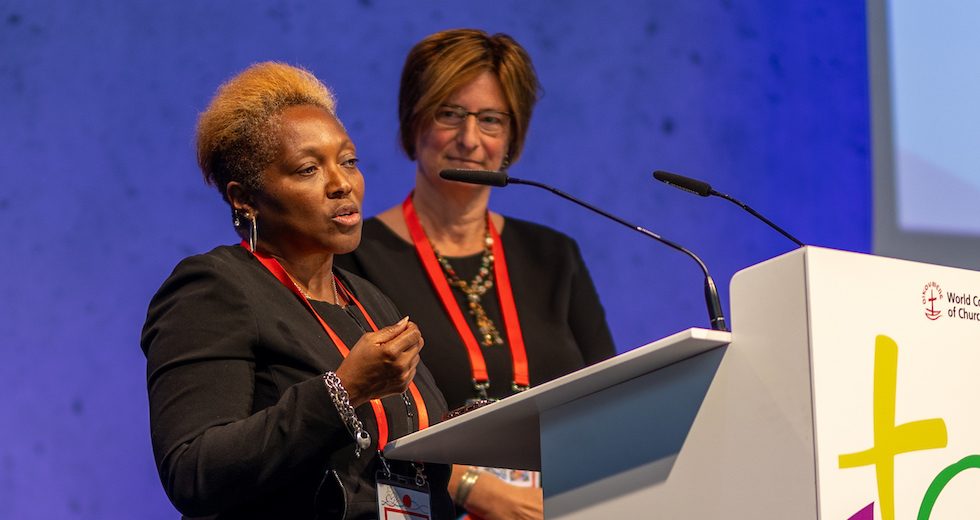 All ecumenical eyes are on Karlsruhe, Germany, where the World Council of Churches (WCC) 11th Assembly is currently taking place. Members of the WCRC are actively involved at the Assembly:

Gail Allan, a member of the World Council of Churches Gender Advisory Group, shares the story of the work for gender justice by the WCC and how it is transforming the church.

The United Church of Christ (USA) sends strong contingent to Assembly: “The UCC has a strong contingent of folks attending, including staff and others with interest in the work of the WCC,” said Karen Georgia Thompson, associate general minister and a current member of the WCC Central Committee.

Uniting Church of Australia delegates President Sharon Hollis and General Secretary Colleen Geyer will be bringing a number of video updates over the next week.

President of the Conference of European Churches Christian Krieger delivered greetings at the Assembly, welcoming the global ecumenical community in Europe with a hope that the assembly will “empower churches to strengthen their vision of reconciliation and unity, in our fractured world today.”

German president Frank-Walter Steinmeier (who also addressed the WCRC’s 2017 General Council in Leipzig) in a keynote speech at the Assembly opening on 31 August, expressed what an honor and delight it was to welcome the global fellowship in Germany.

Of course, WCRC member churches remain active all around the world:

Church leaders, disability advocates, and people simply interested in learning how to make churches more welcoming and inviting to people with disabilities gathered recently for an online training event on the theme “Let’s End #AbleismAtChurch.”

On Sunday, 21 August, with a service presided over by Pastors Daniele Bouchard and Lino Gabbiano, the Synod of the Waldensian and Methodist Churches opened, which ran until August 24 and worked in joint session with the Extraordinary Assembly of the Christian Evangelical Baptist Union in Italy. Therefore, after many years, the Baptist, Methodist, and Waldensian churches met again.

In many places in the world, missionary history is also colonization history. The work of missionaries who wanted to bring the light of Christ often conflicted with the exploitative goals of the colonial powers, and yet the two were closely intertwined – some of which have repercussions to this day. How do you resolve such an identity conflict in your own church? Pastor Henriette Hutabarat Lebang from Indonesia describes in a short interview how the church in Toraja deals with this contradiction.

The “Season of Creation” for this year was kicked off on 1 September in the Middle East after it was launched by the Middle East Council of Churches for the first time in the region last year.