Discernment process relies on group consensus to discover God’s will 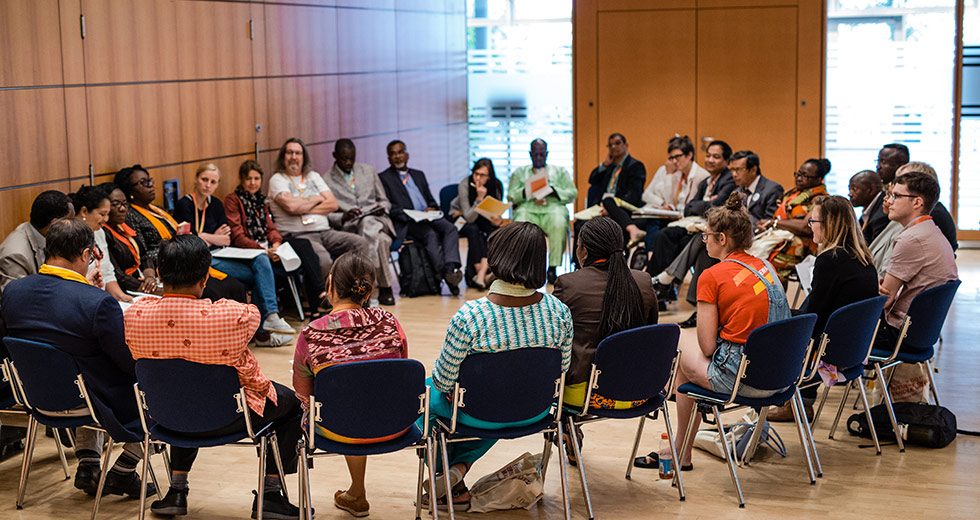 Over the course of the week and a half that the General Council has gathered in Leipzig, attendees have had many opportunities to hear of discernment. But what is discernment precisely? How does the process help delegates determine God’s will for the World Communion of Reformed Churches? And how does the process help to solidify the sense of unity so vital to an organization such as the WCRC?

Gradye Parsons, Executive Committee member since 2010 and seconded staff for the Decisions Procedure Team, helped explain how the Council utilizes consensus-based decision-making at its meeting.

Before attendees reached Leipzig, proposals on the subjects of justice, gender justice, mission in communion and strengthening communion were drafted and submitted to Council delegates. Proposals ranged from support of the Paris Climate Accord at the upcoming G20 meeting to the Declaration of Faith on the Ordination of Women.

In Germany, “Listening Sessions” further fleshed out the details of the proposals up for consideration. Experts on various topics helped clarify the issues and Council attendees were offered opportunities to comment on and question the proposals. Once the proposals were fully detailed, Council members divided into 17 “Discernment Groups” to carefully consider each proposal. 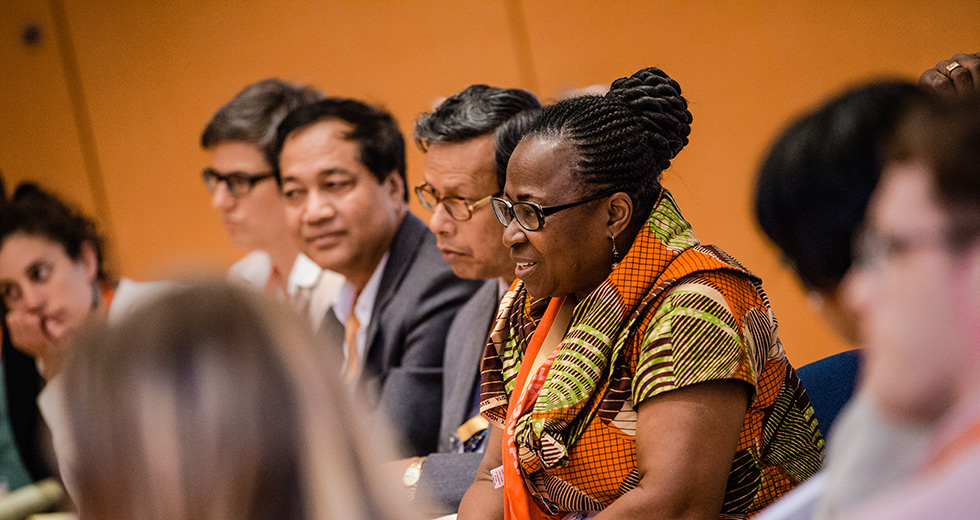 Rev. Lucy Wambui Waweru, minister of the Presbyterian Church of East Africa serving the Nyeri Church in central Kenya, values very much the input that ordinary delegates have on the process within the small groups.

“Discernment Groups include voices from around the world,” she said. “The groups also have a mix of older, more seasoned ecumenists as well as younger delegates. And every voice is heard.”

Within the Discernment Group session, members typically suggest changes based upon group input. At that point, the edited proposals—from each of the 17 groups—are sent to the “Drafting Team.” That team’s job is to filter, summarize and generally meld all 17 recommendations into one unified document. That proposal returns to the Council body in a “Decision Session” for further question and comment.

Finally, after what has been days of discussion and prayer on the issues, the Decision Session moderator asks for a show of consensus. Every voting delegate has the opportunity to express their disposition toward a proposal via means of colored cards. Raising an orange card indicates warmth toward the adoption of a proposal. Raising a blue card indicates coolness to the idea.

Rev. Annedore Held Venhaus, minister in the Evangelical La Plata Church in Tres Arroyos, Argentina, really likes the notion of the colored cards. “I like how the cards express a feeling, not a decision,” she said. “I feel warm to this idea, I feel cool to it. I found that very interesting.”

Waweru agreed. She also appreciated that giving consensus did not mean that a delegate was 100% supportive or opposed to a proposal. Nor did it mean that the delegate envisioned a clear path toward adoption of the new proposal.

Other results of a split showing of orange and blue cards could be a revision of the proposal, taking the dissenters’ concerns into account. The proposal could also be returned to the Executive Committee for further work.

“In a parliamentary system, there is only a ‘yes’ or ‘no’ vote,” said Parsons. “Discernment offers a multitude of options.”

For delegates that have never participated in consensus-based decision-making, the procedures used to consider new proposals at the Council can feel foreign. When you’re used to submitting motions and amendments to motions, when you’re used to Robert’s Rules of Order, to up and down votes, to winning and losing, the prospect of raising a colored card to indicate your feelings can be disconcerting.

But discernment processes such as those used in Leipzig are not new. The Orthodox Church and the Quakers have long used discernment procedures. The Uniting Church in Australia and religious bodies such as the World Council of Churches also follow the practice. The General Council utilized consensus-based decision-making at the Accra and Grand Rapids meetings in 2004 and 2010 respectively. And discernment is also the norm in indigenous cultures, according to Parsons.

“We don’t use the colored cards,” she said. “Once we’ve been through the discernment groups we vote ‘yes’ or ‘no.’ So I was very interested to see the way that the General Council used discernment. But I like this method very much. It’s a process that helps everybody express themselves.”

Likewise, consensus-building is common in Waweru’s native Kenya. “You have to hear everyone’s voices,” she said. “Older people, women, younger people, in my culture they all draw back when it’s time to have a discussion.” Their silence can allow adult men alone to have the final say—sometimes the only say.

“As a facilitator, you really have to learn how to draw those people out,” said Waweru. “You have to balance the dynamics of the group.”

For those who are unable to move from blue cards to orange, both Waweru and Venhaus believe the process offers respect for their convictions. Any delegate who chooses may make a written dissent in the historical record. And in their experiences, both ministers agreed that oppositional views were treated respectfully within their groups. They believed it was the only way that the discernment process could work successfully.

While consensus-based decision-making has many proponents, the process is not without its challenges. And the biggest challenge is most commonly one of time. Allowing space for every voice to be heard means you must plan time for all of those voices to speak.

Venhaus found this hurdle to be frustrating. “Sometimes, when we were discussing very emotional issues, there was only time for group members to state opinions,” she said. “If it is the intent of the Executive Committee to really find consensus, then we must have time to discuss and reason and dialog with one another.”

Waweru agreed that time constraints sometimes made true consensus difficult. She also wondered whether decisions were sometimes impacted because of the little time available to fully weigh the pros and cons of a particular proposal.

“Because you’re all in it together, and discussing and processing as a group, you are thinking and deciding on the spot,” she said. “But, of course, we spend much time praying and seeking God’s direction in this General Council. So you trust that the Holy Spirit will work through the group.”

If the General Council’s discernment process could still use some tweaking, the decision-making strategy has proven to successfully chart the WCRC’s path into the future. And the process ensures that all members have a stake in setting the Communion’s course.

“Church decision-making should look like church, not politics,” said Parsons. “And the process should make community, not fracture it.”

Waweru agrees. “Consensus-building does not solve every issue,” she said. “But the important thing is that we all journey in the same direction. And that we journey together.”