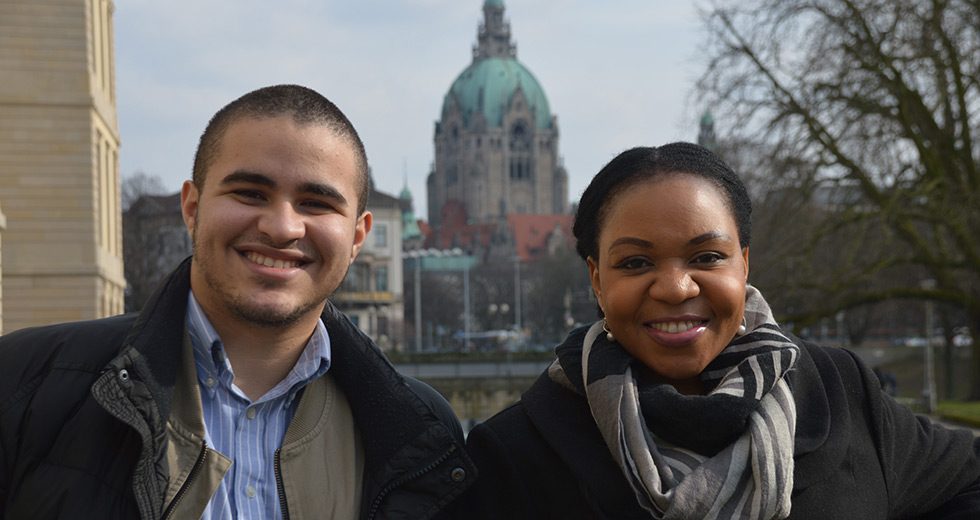 Each year the staff of the World Communion of Reformed Churches welcomes one or two new young adults as interns to its offices in Hannover, Germany. Interns have come from Indonesia and South Africa, South Korea and Taiwan, the United States and elsewhere. With a commitment to ecumenism, they seek connections, experiences and opportunities.

This year’s interns are no different in that regard, and they have the special opportunity to assist on this summer’s General Council, to be held in Leipzig, Germany.

“In the upcoming year I am excited about being on the team that is directly involved in the preparation of the WCRC’s General Council,” says Grenna Kaiya.

Miguel Rosa is also looking forward to the Council: “I think being part of the General Council team and being able to attend the General Council, especially in this 500th year since the Reformation, is what I’m most excited about.”

Grenna is from Malawi but has lived most recently in Oslo, Norway, where she was doing post graduate studies in Diakonia and Christian Social Practice and in International Relations. Miguel is a Puerto Rican university student, studying engineering, and has been a youth leader in his church on the island.

During an intern’s year with the WCRC, they participate fully in the life of the organization, coming away with a richer understanding of the greater church, its role in the world today—and friendships that span the globe.

“I am interested in the ecumenical movement because of its focus on Christian unity and dialogue among peoples and religions of the world,” says Grenna, adding that she has a special interest in peace efforts and justice work. Post-internship she plans to explore opportunities to join “peace and justice efforts around the world.”

Miguel plans on first finishing his degree. And then? “After that I would like to continue and do my Masters degree either in theatre or go to seminary to study theology and the ecumenical movement from the perspective of the youth in different contexts,” he says.

But their next steps are many months—and a General Council—away, and right now they’re immersed in the growing number of details to bring together hundreds of people around the world to discern God’s will through Scripture to set the WCRC’s direction for the next seven years.

Grenna’s responsibilities for the Council are wide-ranging and include contacting member churches that have not yet nominated their delegates, helping the finance office in filing and assisting the communication office.

Miguel has joined the registration team and is “talking to every member church and people that wish to register for the Council. For the member churches I have to make sure they meet our constitutional parameters and be in constant communication with all of them to make sure they received their documents and have been moved to the pertinent teams for visa, travel and accommodation.”