Visit to DMZ recalls conflicts but looks to peace 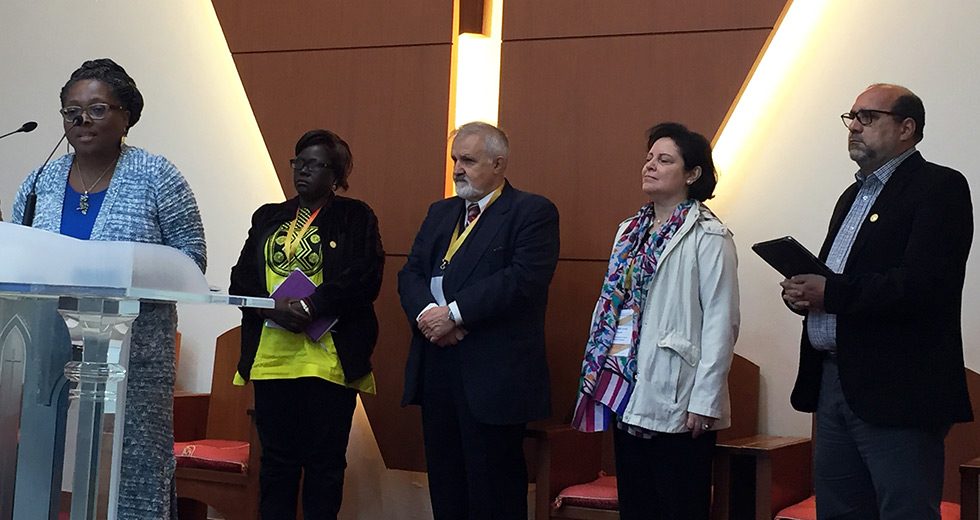 Whether due to fanaticism, the sheer desire of power or material wealth, the reasons for conflicts have been the same for thousands of years. According to the Heidelberg Institute for International Conflict Research in its “Conflict Barometer 2013,” there were an alarming 400 conflicts worldwide out of which 20 were wars.

During the visit to the Demilitarized Zone (DMZ) between South and North Korea the Executive Committee members couldn’t stop from recalling how the world today is plagued with conflict and tension. At a special prayer service at a military chapel in the DMZ, members voiced their concerns and shared how their regions are affected by conflict.

I am challenged by what I have seen this afternoon, here at DMZ. When I entered the compound, the first thing I saw was the inscription, “End of separation: Beginning of Unification.” I was deeply challenged when I reflect on what is happening in my country; Cameroon. The conflict that is gradually developing into a civil war and which has left many people in pain, others mourning their loved ones who had died in the struggle, others living in fear and uncertainty. I keep asking, “God when will you bring all these to a stop?”

Therefore, I seize this opportunity to remind our brothers and sisters of North and South Korea that they have taken the right decision, to end their separation and start uniting. So it should not just be an inscription, but a dream come true. After all, that is what God desires of His Children; that they should be one just as he and his Father are one.

At this moment, we want to add our voices to the rest of the world to appeal to our brothers and sisters, that after war, there must be peace; and after hate, there must be love. So, instead of constructing fences and digging trenches that separate them, let them build bridges that will unite them.

Let the theme for the executive Committee meeting of WCRC challenge us: “From life, for life: Transforming, Reconciling and Renewing,” (2 Corinthians 5:18-19). This implies that even though a lot of water has gone under the bridge, there is still a lot to be gained when we reconcile with God and with one another.

May the Almighty God fill the hearts and minds of our brothers and sisters of Korea, so that they can genuinely surrender to Him and may this decision to end their conflict challenge Cameroonians to ask God to transform their chaos into peace and hatred into love.

I live in the United States. I was born on the island of Jamaica. As a person of African descent living in the United States I am often confronted with challenges of what it means to be in a place where oppression is real and is often denied. The separation that is present among us is often rendered visible but is manifested in the ways that people look and the ways in which what we look like and where we come from has been problematic for our existence, and so in this moment of being here again in South Korea I find myself standing in solidarity with our sisters and brothers who want to see peace.

The Prophet Isaiah said, “Comfort, comfort my people, says your God.” And I think in places where we find ourselves at risk for our existence, we look for hope in the peace that only God can give.

The Psalmist wrote, “How long, oh God, how long.” And those are words quite often that we also find ourselves saying, but we live as the people of hope, a people who live with the promise of resurrection that certainly if God could be present in the resurrection of Jesus, then certainly God can be present each day as we look for peace and hope in places where often there is none. And so, we continue to pray one with the other that indeed God’s peace will reign and will be evident not for generations to come, but we will see that in our day and we will hold on to that peace for our children and our children’s children.

Italy is a country facing conflict among those who want to do something for refugees and those who do not want to. Italy is trying to rescue immigrants arriving from Africa (via Libya) who often risk drowning in the sea. But many people say: We have so many problems, why help others?

We as a small, Protestant church chose to be involved with these who are helpless and often hopeless. We also try to overcome conflict, explaining that as the parable of the Good Samaritan teaches us, you do not choose your neighbour; you simply meet him/her on the road of life.

I come from a beautiful country, with great wealth, but divided by wars. Since we achieved independence from Spain in the 19th century, we have not had a day of peace. The causes of our wars have been political exclusion…, economic exclusion… [and] exclusion due to the accumulation of land.

A little over sixty years ago, some farmers rose up to claim their lands to combat political and economic exclusion. The guerrillas were formed, and in that fratricidal war there have been more than seven million people displaced, 55,000 people who have disappeared, and more than 300,000 who died. The war came to a state of degradation, and its cruelty was so evident that the eyes of the world looked at Colombia as one of the countries that has been unable to resolve its conflicts.

Two years ago, the Colombian government reached an agreement to end the armed conflict with the FARC, one of the oldest guerrilla armies in the world. It has been difficult to achieve the implementation of the agreement and now the long-awaited peace is threatened. In a campaign of hatred and lies, a referendum was voted on by the people, and those who did not agree with the peace negotiation won by a narrow margin. Since then, the long-awaited peace is being threatened every day, and the Colombian government has not fully complied with the agreements.

We have a polarized country that is full of hatred and resentment. The roots of our conflict persist, yet the churches continue to dream and believe in peace while everlastingly sowing hope within the hearts of our people. We are working for reconciliation and believe that we must heal the wounds so that we can move forward with a new epoch in our history.

Colombia also participated in the division of the Korean peninsula, sending Colombian soldiers to fight a war that was not theirs.

Today we believe that it is possible to continue working toward the construction of peace. We continue to dream of a world of justice and freedom where there is bread and peace, a place where joy and laughter return without the omnipresent threat of violence. Today we see with hope the possibility of peace between two peoples that have been separated by the powerful, and that hope of peace gives us the strength to build peace in our country.

We are so happy to gather here at this special time and to witness the move towards peace in the Korean Peninsula. We wait in hope for a better future. Just as the weather is gloomy here at the DMZ today, and we wait for the sun to come out, so we wait in hope for the sun to come out and to see borders removed and people live side by side, celebrating reunion and living reconciliation. We remember all the pain of the people here in this area, where war divided people, and put borders among the people of the same nation.

As people from the Middle East, who experienced war for so many years, we understand what war does for nations and how war affects the future of the generations, but we trust that death and suffering will not have the final word but the power of resurrection will. Through the death of Jesus Christ, and his pain on the cross and resurrection, we have hope and we grow to be the people of hope. This is what kept us going as a church in the Middle East, and this is what sustains the church here in Korea.

We pray that we will be assured that God is with us on this journey and will open our eyes to be a church of reconciliation, where your wellness for all is proclaimed. Let us move in hope that the sun will come out soon.

The stories shared do make one realize that to be hopeful to see a better world is not a utopia and there is peace in sight. The hope shared comes from the assurance that true reconciliation is possible by seeking God and asking for guidance as we continue are journey toward peaceful coexistence.