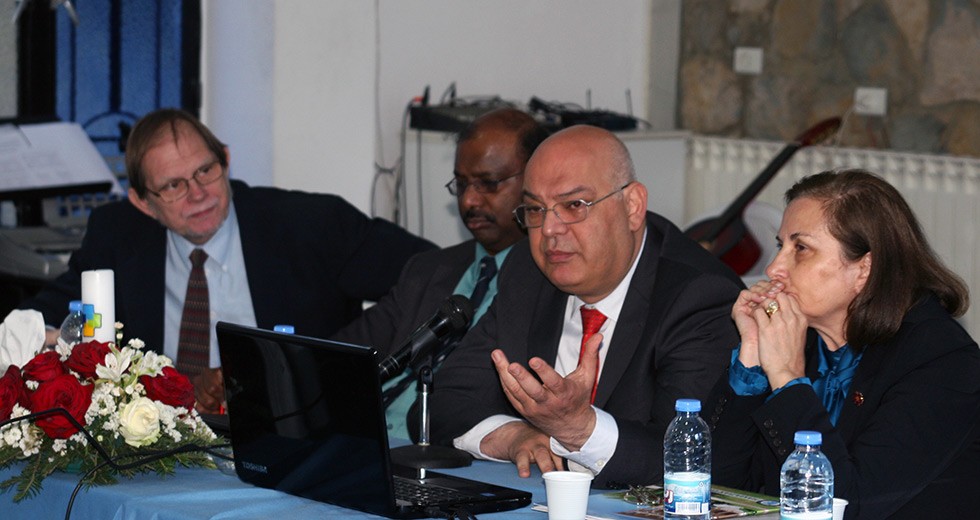 Solidarity and Action in Middle East

“We were here firstly for solidarity,” said Jerry Pillay, WCRC president. “Part of that solidarity was to listen and gain new understandings. We have heard the stories of the people of the Middle East, and all of these stories were able to inform us more accurately about what is happening.”

The statement summarizes what the executive committee heard and then presents a response that includes a call to peace, stronger bonds with churches in the region and ways in which WCRC member churches can become more deeply involved.

“This statement comprises a call to us to walk more closely with the churches of the region and to commit ourselves to support the Middle East Christians so that they stay, flourish and be peacemakers,” said Chris Ferguson, WCRC general secretary. “We must look at the root causes of conflicts here and call on world governments to change their propensity to look for military solutions.”

The executive warmly welcomed Martin Junge, general secretary of the Lutheran World Federation (LWF), to its meeting. “The Reformation, this we have been stressing as we journey towards the [500th] anniversary [in 2017], does not belong exclusively to Lutherans,” he said. “It calls us indeed to reflect how we, Reformed and Lutherans, intend to give expression to our shared sense of ownership of reformation, while expressing at the same time the distinctiveness of our theological and spiritual profiles.”

Building on a successful series of dialogues between the WCRC and LWF, the executive committee is seeking to move from dialogue to implementation as an expression of visible unity and an embodiment of the Lund Principle on the global level between the organizations. The Lund Principle affirms that churches should act together in all matters except those in which deep differences of conviction compel them to act separately.

Two processes will push this goal ahead. One will look toward the 500th anniversary of the Reformation and will include specific proposals at the 2016 executive committee meeting. The second will engage in an analysis of the “Joint Declaration on the Doctrine of Justification,” a theological statement made by both the LWF and the Catholic Church’s Pontifical Council for Promoting Christian Unity, through a series of consultations.

Address of the President

In his address to the executive committee Pillay noted two particular challenges facing the world today—injustice and fragmentation—and called the Communion to “work for justice, peace and unity in the church and most significantly in the world.”

Pillay held up both the confessions of Accra and Belhar as documents through which the WCRC can engage in justice and unity. “A living unity, real reconciliation and caring justice belong integrally together,” Pillay said.

“Our focus on the Accra Confession should help us to remain focused and faithful to our calling in addressing the injustices in the world today,” said Pillay. “It will also help focus us in our desire for unity within the Communion and with others as we continue in the endeavor of Christian unity.”

Report of the General Secretary

In his report to the executive committee Ferguson called for a refocusing of the organization’s work around its calling to communion and commitment to justice, framed within its strategic plan.

The WCRC’s strategic plan, adopted in 2011, centers the work of the organization on five key directions—communion, ecumenical engagement, justice, mission and theology—and Ferguson’s report cited many of the ways the WCRC is currently fulfilling the plan.

After reviewing dates, venues and costs for the next general council, the executive agreed to change its location and timing. The 2017 General Council will now be held in Leipzig, Germany, from 27 June to 7 July with pre-council gatherings for youth and women held the first two days.

The executive decided to accept the invitation of the Alliance of Presbyterian and Reformed Churches in Latin America (AIPRAL) to hold its 2016 meeting in the region, specifically in Cuba. Having long called for an end to the United States embargo of Cuba, the WCRC’s presence there in this time of historic change can be seen as a sign of solidarity and clear witness.

The World Communion of Reformed Churches’ executive committee meets annually to provide oversight to the work of the WCRC, both programmatically and financially. It held its 2015 meeting at the Dhour Choueir Evangelical Conference Center outside of Beirut, Lebanon, under the theme “God of Life, Lead us on your Path of Justice, Peace and Reconciliation.”