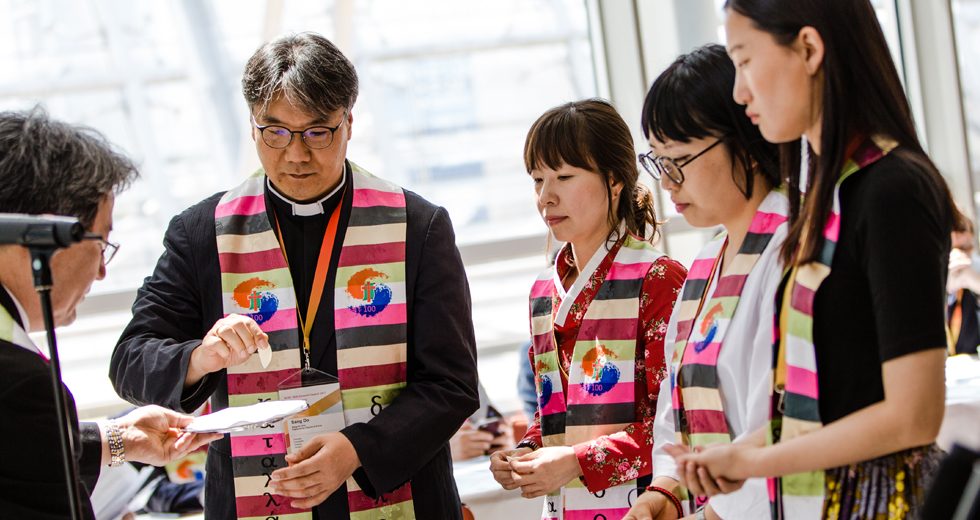 [The Lord] shall judge between the nations,
and shall arbitrate for many peoples;
they shall beat their swords into plowshares,
and their spears into pruning hooks;
nation shall not lift up sword against nation,
neither shall they learn war any more.
—Isaiah 2:4 (NRSV)

The World Communion of Reformed Churches (WCRC) welcomes the progress toward peace made at the summit in Panmunjom between the North’s Kim Jong-un and Moon Jae-in of South Korea.

As this is but a single, though significant, step in a long journey, the WCRC calls for continuing prayer and activism for peace, healing and reconciliation from its members along with sisters and brothers around the world.

God of Life,
We give you thanks for the movements towards peace in the Korean Peninsula.
We are grateful for visions of reunification.
We ask that our small steps become large leaps
That our candles become raging fires
That our swords become plowshares
That our spears become pruning hooks
That our arms will become embraces
Outstretched to each other
As your Son’s arms are outstretched to us in love.
Amen.

“We have a longstanding commitment with the Korean peninsula,” said Chris Ferguson, WCRC general secretary, who will visit North Korea with an ecumenical delegation next week. “We cherish the ongoing ecumenical accompaniment of the relationship, dialogue and exchange between Christians from North and South Korea as an important resource for peace in the region.”

The ecumenical delegation, composed of members from the WCRC and the World Council of Churches (WCC), will meet with leaders of the Korean Christian Federation (KCF). This will be the second visit by the WCRC in the last three years.

Last year, the KCF sent a delegation to the WCRC General Council, held in Leipzig, Germany. An “agape lunch” was held at which both North and South Koreans shared in the Lord’s Supper, and a plenary session was devoted to peace on the Korean peninsula.

The General Council instructed the WCRC to bring together the many ecumenical initiatives working for peace to create an “Ecumenical Accompaniment Process for Healing, Reconciliation and Peaceful Reunification of the Korean Peninsula.”

“The WCRC is committed to working with the Korean Ecumenical Forum, other ecumenical bodies and the faith collectives for peace and reconciliation in the Korean peninsula. We look forward to working with our partners and member churches to advocate for demilitarization and peace,” said Philip Peacock, WCRC executive secretary for justice and witness.

Besides Ferguson and Peacock, the ecumenical delegation to North Korea will include Olav Fyske Tveit, WCC general secretary; Peter Prove, WCC director of the Commission of the Churches on International Affairs (CCIA); Fred Chikane, CCIA moderator, and Sylvana Maria Apituley, WCRC vice president. The visit, along with the WCRC’s other work for Korea, is grounded in the WCC’s Pilgrimage of Justice and Peace.