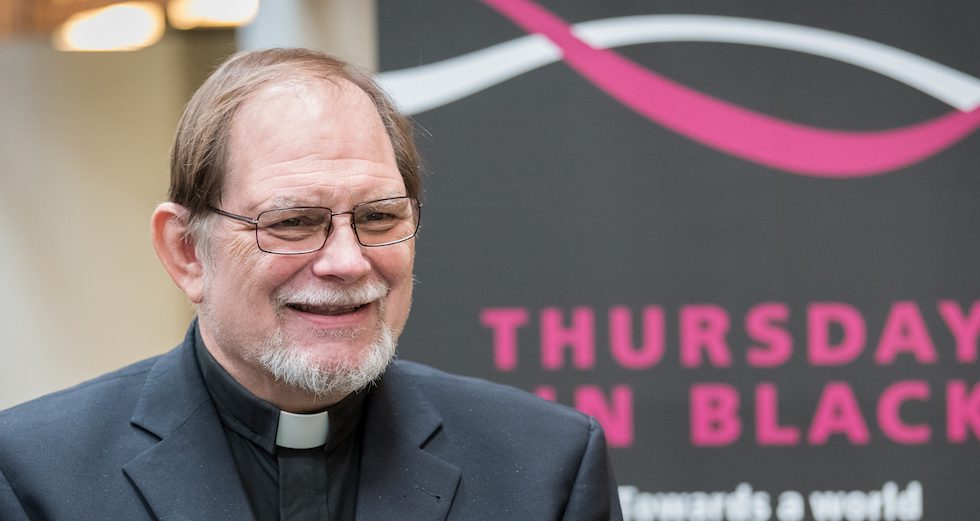 Chris Ferguson is concluding his term as general secretary of the World Communion of Reformed Churches (WCRC) on 31 August. Below is an edited interview with him, reflecting on his seven-year tenure.

Seven years ago you said, “Called to communion, committed to justice, the WCRC is dedicated to unity for the transformation of the world.” How has this summative statement played itself out during your time as general secretary?

You can see this has played itself out in a couple of ways. One is both a commitment to receiving unity as a gift and to really moving from a loose alliance to struggling to be a Communion, and, second, seeing the Communion’s calling to justice.

The foregrounding of justice has really played itself out post-Council through the establishment of a strategic plan for the real transformation of the world. There was a commitment to act as a global family. We made local issues global issues. Our unity has to play itself out in real acts.

In that initial interview, you also said, “We are charged with the imperative to contribute to the wider ecumenical movement at a time when the way forward is not clear and the energies are flagging.” How has this impacted the WCRC’s work during your tenure?

At the time when I said this, we decided, rather against the trend, that we would put a lot of energy into trying to work through strengthening our inter-communion relations, and were able at the 2017 General Council to celebrate the Wittenberg Witness. And we hadn’t been part of the ecumenical conversations for many years on the JDDJ (Joint Declaration on the Doctrine of Justification). Not only was our signing celebrated at the Council, but it has now helped form what was an agreement between the Lutherans and Catholics into a group of five, including the Anglicans and Methodists and us as well.

We took seriously the commitment to position ourselves to become members of ACT Alliance, to become more active members in the Global Christian Forum, in our work with the Lutheran World Federation through the Wittenberg Witness and JDDJ. It isn’t only some abstract theological commitment but the way we transform the world together.

The 2017 General Council in Leipzig, Germany, came mid-way through your term. What was the impact of the Council on your work as general secretary, as well as that of the WCRC?

The basic, positive impact was the General Council really allowed us to focus on the business of communion-building. We knew we had to use the General Council to not put everything else aside but to allow it to help us accomplish all of our other goals. So, the work of the Council became our program work. It put wind in our sails.

In that the General Council was extremely stressful, it kind of started a period to try to do the impossible with fewer resources than necessary. We developed a ferocious style and ambition by taking on too much. And we were rewarded by doing it well. It helped move us ahead—and who knows what would have happened without COVID? Part of the impact was this double-edged sword of really realizing the power and possibility of our Communion acting together to make an impact by punching above our weight.

It was an exhausting, ambitious time with many payoffs. It’s really cemented in our DNA that there is not a question between unity and justice. Our DNA has been set to be a discerning, confessing, witnessing, reforming community. It’s consolidated who we are as a Communion.

How has the COVID-19 pandemic impacted your work and that of the WCRC?

I think it’s not an exaggeration: in every way. How we organize our every day work. The readjustment of our strategic plan. People are even rethinking very fundamental biblical and theological concepts. And certainly they’re rethinking the how and the meaning of being church around the relationship of gathering together and the mission of the church when church meetings have been off or it hasn’t been healthy or right to gather. But in a basic way, the COVID pandemic itself, most of what we did couldn’t be done any more.

When you zoom out, the pandemic forced us really to understand the depth of the crisis that the world is in. It made it unavoidable and clear we were in an interlocking series of crises where the whole world community had to change its path. COVID made that clear. Basically, COVID has been for us a kairos moment, a moment of rethinking, rerouting.

So, we’ve integrated what we learned from the General Council process of discernment, from our strategic plan about being discerning, confessing, witnessing, and reforming—it’s changed everything we do, in that everything we do in response to the change is that we’ll do everything required, instead of the other way around.

What’s been your greatest joy of being general secretary?

I really think it kind of goes back to the first question: to really see the growth in the WCRC as a confessing koinonia. Rather than simply supporting—which has been also important—as a membership organization, we help our churches fulfill the objectives of the organization. But now we’re much more than that. We’re actually a global fellowship. Examples: the Taiwan Ecumenical Forum, the great number of people who have expressed solidarity and support for the church in Colombia. Not only life and death issues. In many, many ways it has ben a joy to see.

But if there was a single moment that just seemed right, it was standing with the other JDDJ groups where we had just signed the Wittenberg Witness. So, we had consolidated our relationship where communion makes a difference with the Lutherans, and then we moved to a larger table, signing the JDDJ, including with the Roman Catholics and Anglicans. The Reformed community hadn’t been a part of that for years. We weren’t only celebrating our part of that but adding our unique page to the JDDJ book—justice and justification—that moment was symbolically a moment of great joy.

What are you doing next?