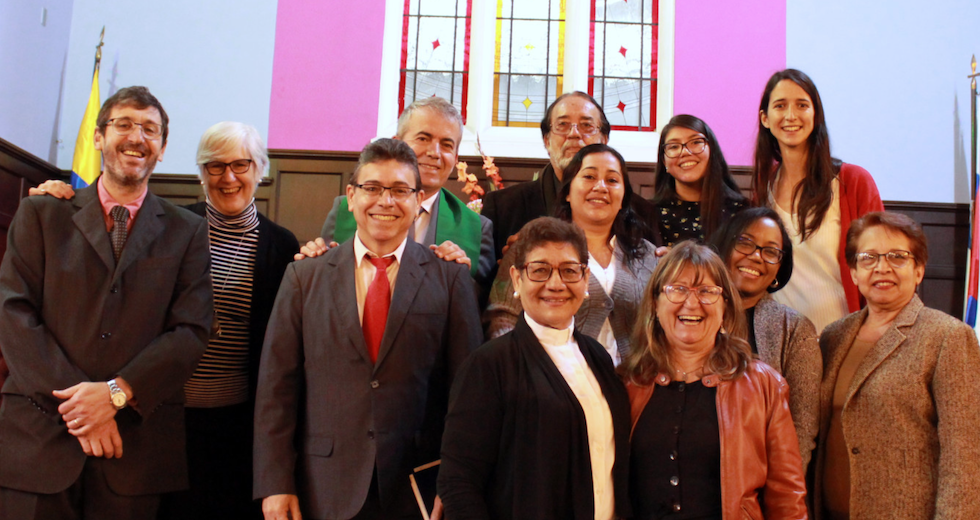 The installation of the new Executive Committee of the Latin America Alliance of Presbyterian and Reformed Churches (AIPRAL), which was elected at the XIII General Assembly last April, was held at the First Presbyterian Church of Bogota, within the framework of the local community worship service.

The incoming board will meet during the week with the outgoing board to develop the action plan for the period 2022-2027 in accordance with the guidelines of the Assembly.

The Presbyterian Church of Colombia – Reformed Synod (IPC-SR) joined AIPRAL and was welcomed by the other member churches during the XIII General Assembly of AIPRAL. The First Presbyterian Church of Bogota belongs to the aforementioned denomination and in its facilities, within the framework of the Sunday worship service, the installation of the new Executive Committee of the Alliance for the period 2022-2027 took place.

Germán E. Suárez Nuñez of the IPC-SR who welcomed the ecumenical brothers and sisters and led the liturgy. The message was delivered by the outgoing Executive Secretary Dario Barolin, who addressed the text of Acts 2:42 inviting to remember and revitalize the teachings of the apostles, as well as the value of the konionia for John Calvin, as sharing the sacrament of the Lord’s Supper but also as service to society.

“I surprise no one if I say that Christianity globally is in crisis. But this crisis is also an opportunity to bring churches out of their stagnation, as happened in the early church,” Barolin said. “Prayer is the place we open in our lives for God to enter and so we become community, and the miracle of Pentecost invites us to think about the ways in which we communicate and build community, to recreate ourselves as vital churches.”

Eison Angulo gave a brief introduction on the history and tasks of AIPRAL and announced the moment of installation of the new Committee. Agnaldo Pereira Gomes, outgoing president, thanked the commitment of the outgoing members as well as the incoming leaders, who received the imposition of hands by the whole community, resulting consecrated to the ecumenical and reformed mission in the continent.

Finally, incoming President Wertson Brazil took the floor, thanking the local community for the welcome and asking for collaboration and participation in ecumenical life that strengthens the action of AIPRAL in its various tasks,

The First Reformed Church of Bogota provided its offices during the course of the week for the transition meetings of the Executive Committee.

“Our thanks to God who gathers us in his name, to the IPC-SR and to the local community who receive us in the Christian love that commits us as sisters and brothers, to be a prophetic voice and to mission together,” said AIPRAL.