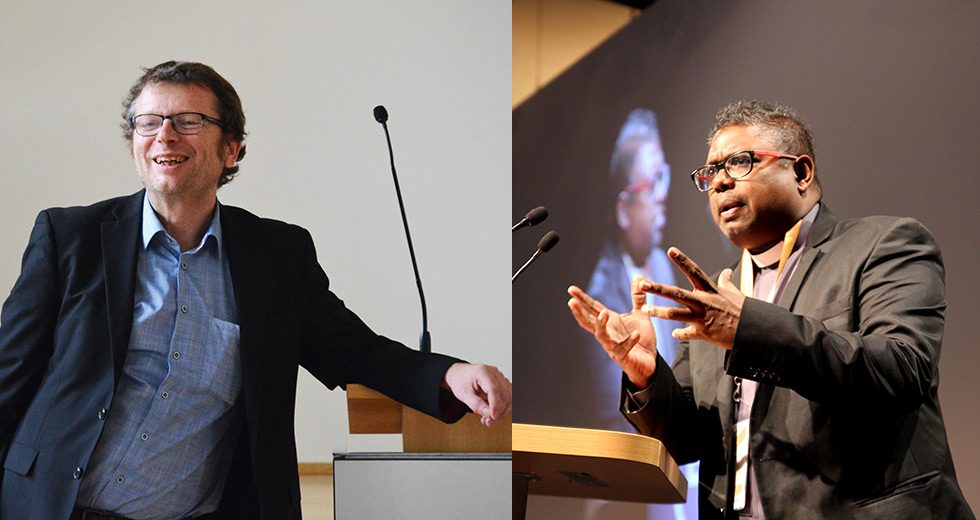 Peacock, an ordained presbyter in the Church of North India, has been active in ecumenical work for more than a decade, including participating in the last two General Councils, as a lecturer for the Global Institute of Theology (teaching a class on “Positive Masculinities”) and as a member of the WCRC Justice Network and the Broken for You anti-human trafficking working group. He has spoken and written extensively, including an essay on Empire in Prayerful Preparation: Exploring the 2017 General Council Theme and a keynote address at the Council’s justice plenary.

“I see a commitment to justice as not just arising out of our faith but as a better way of being Christian,” says Peacock. “I also strongly believe that mission today is resistance to empire and that being a Christian who draws from the Reformed traditions means that we are committed to a particular positionality on the margins from which we seek to dismantle all hierarchies.”

“I believe the WCRC is at the forefront of the movement towards justice in the context of the church and the ecumenical movement,” says Peacock. “As a small organization it is uniquely placed to be prophetic.”

Peacock has a ThM degree from Tamil Nadu Theological Seminary with a focus on Dalit theology and gender studies and is presently completing his PhD studies through Radboud University in the Netherlands. He is currently an associate professor at Bishop’s College, Kolkata, where he has been in the department of social analysis since June 2000.

Lessing, an ordained minister in the Evangelical Church of Westphalia with a PhD from the University of Heidelberg, currently serves as the WCRC’s General Council coordinator. As a seminary professor in Namibia for a decade he focused on systematic theology and ecumenism. Alongside this work, he dedicated his energies to church projects in Namibia, South Africa and Germany aimed at coming to terms with legacies of colonialism and apartheid. Lessing engaged 50 international, interdisciplinary scholars in a study process (now published) which has created a usable platform for churches to engage the wounds and divisions that attend these legacies.

Lessing sees Christian faith and theology as a powerful resource in the struggles of our day. As he says, “theology matters,” and it can “both guide and motivate our work for justice.”

He is enthusiastic about coordinating the work of theology and communion for the WCRC. “I like to work in positions where I can connect to people from all over the world on questions of faith,” says Lessing. “I think the network of the WCRC is particularly interesting because the WCRC as an organization works as a communion which actually brings people together in interaction from different continents, theological backgrounds and cultural backgrounds.”

Before making their unanimous recommendation to the Executive Committee just prior to the 2017 General Council, the search committee discussed issues of gender balance, especially as Peacock and Lessing join two men already on staff, General Secretary Chris Ferguson and Phil Tanis, executive secretary for communications.

“Though it would be advantageous to have women serving in either of these two positions, this is only the tip of the iceberg in terms of the gender justice work that needs to happen in the WCRC,” says Anna Case-Winters, chair of the search committee. “Women in leadership at every level must be on the table of consideration. I am heartened by several actions taken at this General Council that signal our concern for gender justice: our declaration on the ordination of women, our expressed commitment to seek gender balance in all future staffing and elections, the fully representative Executive Committee we just elected and in particular the election of Najla Kassab as president.”

Case-Winters also noted that other factors for balance were considered and achieved, including geographic origin, age and race-and that the candidates’ gifts, skills, experiences and personal aptitudes were decisive in the final decision. “Both Philip and Hanns have strong records in terms of their advocacy for gender justice,” she added.

Prior to Peacock and Lessing’s public presentation at the Council, the assembly passed a motion that stated, “To reflect the Communion’s commitment to gender equality…in the hiring process of senior staff, gender equity will be pursued vigorously with a clear goal of at least 50% female.” This mandate will certainly have an impact on future hires.