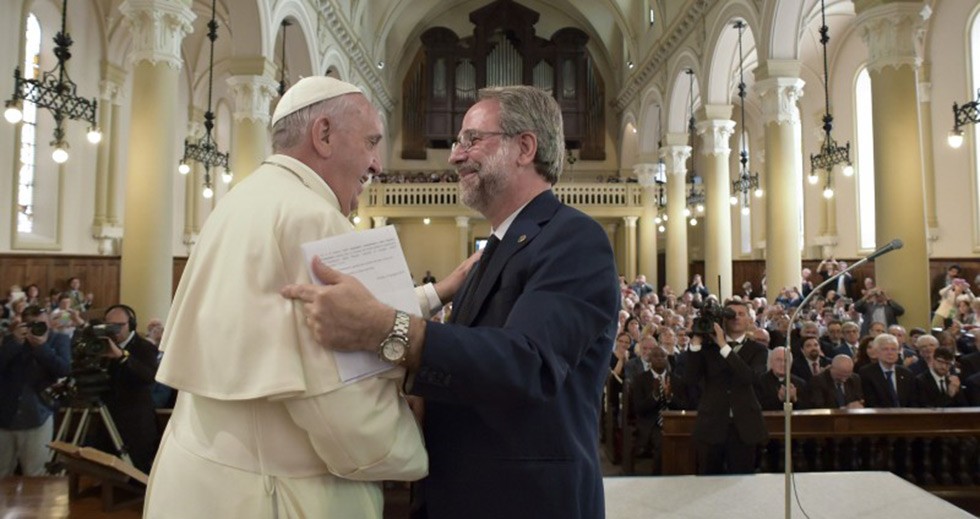 In late June Pope Francis turned his eyes to his home country and ecumenical church relations. For centuries now the relationship between the Catholic and Waldensian Churches has been defined by a violent history. The conflict stems from the 15th century when the Roman Catholic Church tried to exterminate the small Protestant movement, which survived to become the oldest Christian minority in Italy and a member of the WCRC.

Pope Francis paid the first visit by a pope to a Waldensian temple last Monday in Italy’s northern Piedmont region. Saying in an address, “On behalf of the Catholic Church, I ask forgiveness for the un-Christian and even inhumane positions and actions taken against you historically. In the name of the Lord Jesus Christ, forgive us!”

The Waldensians in the region saw this plea for forgiveness as an inspiring and critical step forward in the healing of the two Churches’ relationship.

The relationship between the two Churches extends beyond their homes in Italy; both also have large presences in Latin America. The vast expanses of the Atlantic Ocean were not enough to quell the rivalry. Vice Moderator of the Board of the Waldensian Church of the River Plate, Carola Tron, describes her experience growing up a Waldensian in the River Plate region of Argentina and Uruguay:

Across the street it is the Catholic church. I remember very well… We named “mixed marriages” to a Catholic and a Protestant couple. For many families this was not possible (from both sides). If a mixed couple married then conflict came later with the children, the baptism and Christian education. Another example is the cemetery…on the right side there are Catholics and on the left the Waldensians.

While Tron never saw the relationship turn violent as it had done in Italy, she describes a very real divide between the two Churches, a breakdown in Christian fellowship.

After Pope Francis made his address, Tron was inspired and hopeful saying, “I felt a thrill in my body that I did not know for sure how to interpret. And now I think it is the ancestors’ memories coming together to the present time after hundreds of years of persecution, pain, discrimination against, and the last years silence about it.”

This long awaited reconciliation comes at the intersection of a time of great celebration and dire circumstance for the worldwide church. The 500th anniversary of the Protestant Reformation is coming up in 2017, an anniversary that brings the complicated and long history between the Protestant and Catholic Churches into the spotlight.

In the Waldensian’s and Catholic’s mutual home country of Italy the growing influx of migrants has reached crisis level, the Waldensians are already cooperating with other Churches around the country through the Federation of Evangelical Churches in Italy (FCEI) to combat inhumane conditions for refugees. Pope Francis briefly mentioned the crisis in his address. The Waldensians and the FCEI could greatly benefit from the massive Catholic Churches aid in their “humanitarian corridor project.”

At the end of August the Synod of the Waldensian and Methodist Churches responded with an official letter to the Pope, which says, in part:

We welcome your words as a repudiation, not only of many iniquities carried out but also of the way in which the doctrines which inspired such iniquities were lived out. In your request for forgiveness we further perceive the clear wish to begin with our Church a new story, different from that which lies behind us, that we may work towards that ‘reconciled diversity’ which would allow us engage in a common witness to our common Lord Jesus Christ. Our Churches are willing and ready to write this story, which is new also for us.

← Prayer Request for Greece
Stories of Strength: The Stewards of 2015 Executive Committee →

One Comment on “Pope Francis reconciles with Waldensian Church”