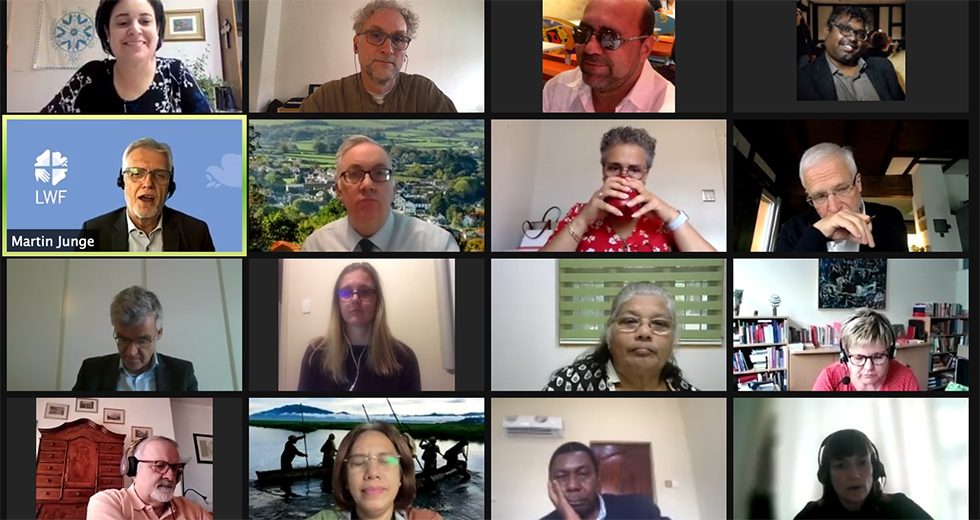 The World Communion of Reformed Churches (WCRC) Executive Committee, meeting for the first time in two years due to the COVID-19 pandemic, approved an interim leadership plan, set task groups for sustainability and the next General Council, adopted a Gender Justice Policy, thanked outgoing General Secretary Chris Ferguson for his service, and produced a message for members and partners.

The text of Esther 4:14, “At such a time as this…” framed their deliberations. Using this text, President Najla Kassab invited the Communion into a renewed imagination for the various challenges for the Communion and also called for a radical hope.

“We stand in hope as the life of Jesus is manifested in us. As a Communion we renew our imagination inspired by hope where our Lord continues to journey with us for a better tomorrow,” she said.

The Message from the Executive Committee (available in English, French, German, and Spanish) reflected this tone while also noting the state of the world:

The COVID-19 pandemic revealed the injustices that surround the world whether they are social, political, or economic. It exposed inequality, exploitation, and oppression that are rooted in economic systems and exploited the dignity of people where healthcare and other fundamental rights are only available to those who can afford it. Almost everywhere the vulnerable, poor, and marginalized are most affected by the disease and by the measures of disease control.

In this situation we call upon the whole Communion and all people of goodwill to join us in discerning “What does God require of us” (Micah 6:8)? Such a process shall strive to establish a renewed and refreshed theological understanding of the current crisis. We hope that such a practice of common discernment shall lead the whole Communion—local, regional and global—to a prophetic theological response and determined acts of witness that speaks the truth to power and calls for justice.

In adopting a Gender Justice Policy, the Executive Committee sought to advance the WCRC’s vision of living out its call to communion and commitment to justice, enabling and inviting churches to participate in God’s transformative mission of gender justice and partnership. The policy seeks to address gender inequalities and injustice in the Communion and member churches.

Outgoing General Secretary Chris Ferguson, whose term ends on 31 August, was thanked for his seven years of service. A festschrift in his honour was presented and will be available shortly as the next edition of Reformed World, the WCRC’s theological journal.

In his report to the Executive Committee, Ferguson expressed his “gratitude to our president and the officers, the Executive members, and all those in the regions, networks, and committees with whom I have had the pleasure to serve.”

With no candidate presented by the General Secretary Search Committee, the Executive Committee approved a year-long interim period that will begin on 1 September. It mandates that the three current executive secretaries (Hanns Lessing, Philip Vinod Peacock, and Phil Tanis) take on the functions and responsibilities of the general secretary, along with the president, Officers’ Committee, and Executive Committee members as assigned.

“The interim period will allow a new model of shared responsibility where the involvement of the officers, executive members, and regional leaders will be vital,” said President Kassab in her address to the Executive Committee.