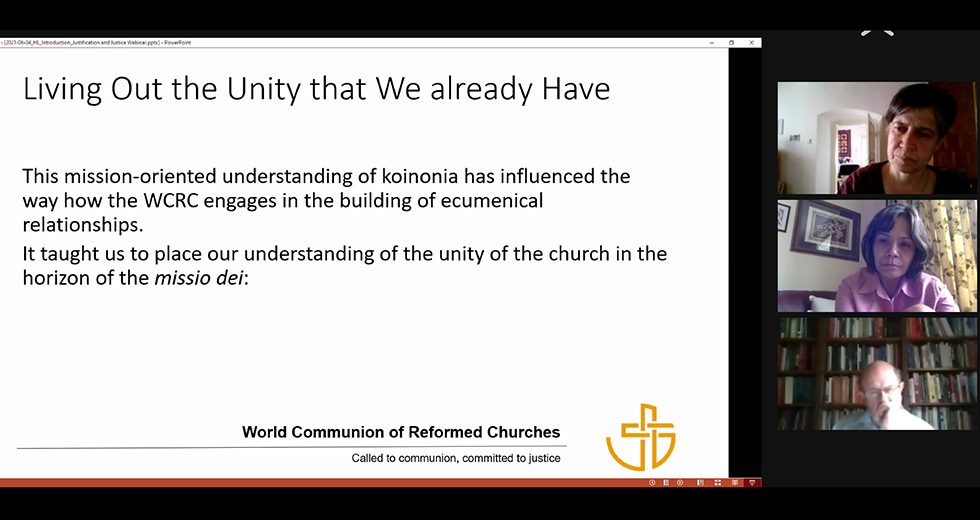 A webinar on “Justification and Justice: The Journey of the WCRC from Columbus to Notre Dame” gathered nearly two dozen participants to trace “the steps of a journey on which we’ve made momentous advances in the unity of the church—making that unity more visible in our life together,” as host Anna Case-Winters said.

The recent dialogue processes between the World Communion of Reformed Churches (WCRC) and both the Lutheran World Federation (LWF) and the Roman Catholic Church, through its Pontifical Council for the Promotion of Christian Unity (PCPCU), were detailed by dialogue team members.

Priscille Djomhue noted that the goal with the Lutherans “was to seek ways to encourage more visible unity between Lutheran and Reformed churches around the world” which included exploring possibilities of common actions and statements.

This dialogue produced the report “Communion: On Being the Church” which itself was the basis for the Wittenberg Witness, a statement affirming the WCRC and LWF’s common call to continued renewal and cooperation, which was signed on the occasion of the 500th anniversary of the Reformation in Wittenberg.

“Justification and Sacramentality: The Christian Community as an Agent for Justice,” the report of the latest Catholic-Reformed dialogue, was a stepping stone toward the WCRC signing the Joint Declaration on the Doctrine of Justification (JDDJ), at the same worship service in Wittenberg during the 2017 General Council.

“The journey from Rome to Wittenberg” not only provided continuity with past dialogues with the Catholic Church but it also incorporated the “need for practicality to ensure statements move beyond mere theory to practical aspects,” said Benebo Fubara-Manuel.

“Justification must be seen in concrete action, grounded in God’s own action for justice in the whole of creation,” said Reinerio Arce. “Sanctification impels the Christian community to act for justice. It is clear that we as churches share the conviction that justice and justification are inextricably joined in life by faith. We stand together on this. The imperative for justice flows necessarily from justification and from the call to the whole church for holiness.”

But the webinar was designed to do more than present an overview of the WCRC’s past dialogues. It was also a launching point for the next phase of dialogues, as well as a deepening of the ongoing ecumenical partnerships already established.

“This idea of where to go from here has to do with the fact that we no longer approach dialogues as if there is a storehouse of Reformed ideas,” said Chris Ferguson, WCRC general secretary. “Instead, we are actually sharing a living tradition. What does it mean to be in dialogue with a Reformed church always reforming?”

“Our long-range hope is for full communion” with all Christians, said Case-Winters. “In one sense, unity is already ours in Christ. It is the gift of God; we do not create it and cannot destroy it. Our divisions, nevertheless, obscure our unity and hamper our witness.”

“It is not be enough to appeal to the unity we have spiritually or the unity we will have eschatologically. How can we be effective in the ministry of reconciliation that has been entrusted to us unless we ourselves are reconciled to one another? Unity is, as we say, not only a gift but also a calling. Can we find new ways of being church together?” she asked.

Participants in the webinar included members of various ecumenical dialogue teams, as well as several ecumenical guests. Regular meetings are planned to continue the discussion.