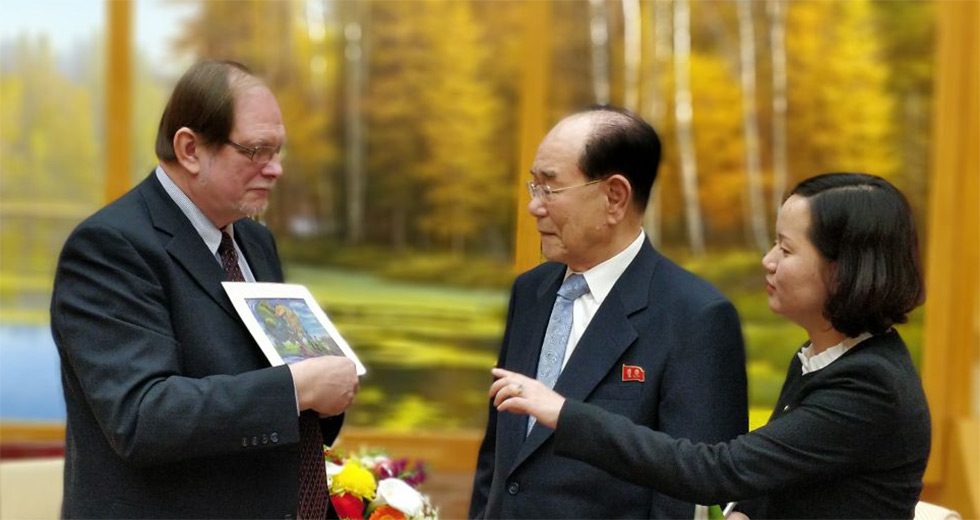 A six-person international ecumenical delegation, comprised of representatives of the World Council of Churches (WCC) and the World Communion of Reformed Churches (WCRC) and led by Rev. Dr. Olav Fykse Tveit, WCC general secretary, and Rev. Dr. Chris Ferguson, WCRC general secretary, visited Pyongyang on 3-7 May, at the invitation of the Korean Christian Federation (KCF) of the Democratic People’s Republic of Korea (DPRK).

This visit took place just a few days after the historic events of the Inter-Korean Summit at Panmunjom on 27 April, at which president Moon Jae-in of the Republic of Korea and chairman Kim Jong Un of the State Affairs Commission of the DPRK jointly signed the Panmunjom Declaration for Peace, Prosperity and Unification of the Korean Peninsula. These extraordinary initiatives have created a new momentum for peace which the delegation strongly wishes to affirm, support and encourage.

The worldwide ecumenical movement has been engaged in promoting dialogue, peaceful co-existence and the reunification of the divided Korean people for more than 30 years, especially since the 1984 Tozanso Consultation convened by the WCC.

The statement published after the visit reads: “We give thanks to God that today we are able to celebrate together with KCF and the NCCK the political commitments expressed in the Panmunjom Declaration, encompassing so many long-held ecumenical hopes and aspirations for peace on the Korean Peninsula, including especially the commitments to joint efforts to alleviate military tensions, to promoting inter-Korean exchange and cooperation, to achieving a peace treaty to replace the 1953 Armistice Agreement, and the solemn declaration that there will be no more war on the Korean Peninsula.”

The statement added: “We celebrate and affirm the joint declaration of commitment to realizing, through complete denuclearization, a nuclear-free Korean Peninsula—in the context of our efforts for a nuclear-free world through advocacy for universal ratification and implementation of the Treaty on the Prohibition of Nuclear Weapons.”

During the visit to the DPRK, the delegation met and discussed with representatives from the KCF, as well as with H.E. Kim Yong Nam, president of the Presidium of the Supreme Peoples Assembly of the DPRK, and with Prof. Dr. Ri Jong Hyok, president of the National Reunification Institute.

Tveit and Ferguson met in Seoul prior to traveling to the DPRK with H.E. Cho Myoung-Gyon, South Korean Minister for Unification, and the ecumenical delegation met with President Kim Yong Nam of the DPRK Supreme People’s Assembly in the DPRK and they affirmed and emphasized the importance of the role of church leaders and faith communities in past and future efforts for peace and reunification of the Korean people.

The delegation saw the Inter-Korean Summit and its outcomes as an almost miraculous new spring for peace in the region, after months and years of dangerously escalating tensions. “We visited Pyongyang in a beautiful new spring season, not only in the natural world but also in the relations between the people and governments of the Korean Peninsula,” said Tveit. “We know that spring is also a season in which to work, to ensure that we reap a good harvest of what has been sown.”

Rev. Dr. Chris Ferguson, WCRC general secretary added: “Together, the WCC and the WCRC are committed to mobilizing our churches around the world in support of these new steps towards the peace that we have so long sought and desired for the people of the Peninsula and the northeast Asian region.”

The delegation urges “all churches, all Christians called by our Lord Jesus Christ to be peacemakers, and all people of good will around the world to join in supporting the Korean-led initiatives for peace expressed in the Panmunjom Declaration, as a foundation and framework for achieving a sustainable peace for the Korean people, for the region and for the world.”

Image at top: WCRC General Secretary Chris Ferguson presents a gift to H.E. Kim Yong Nam, president of the Presidium of the Supreme Peoples Assembly of the DPRK.