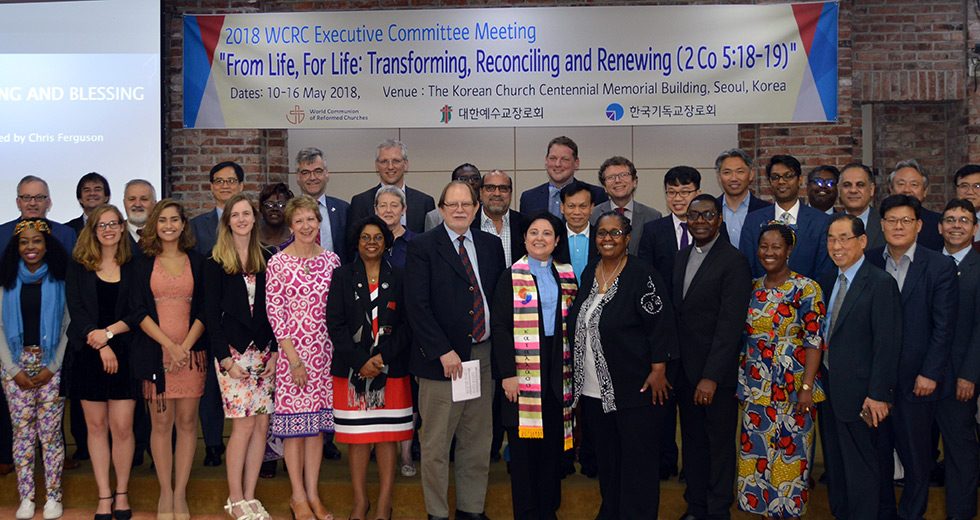 The Executive Committee of the World Communion of Reformed Churches, holding its annual meeting in Seoul, South Korea, issued a message to its churches calling for a continuing commitment to peace, reconciliation and justice—especially on the Korean peninsula.

“We met in Korea at a momentous time in history when attempts towards peace, reconciliation and reunification loomed large on the horizon,” the message says. “From the perspective of God’s saving work in the world it clear that the division of the Korean peninsula is not the end of the history for the Korean people. The experience of the Korean peninsula shows us that war, violence and militarization can be overcome and that vested interests that sow the seeds of conflict will not win.”

The message also noted other conflicts in the world, including Indonesia, Palestine, Israel, Cameroon, Kenya, Syria, Brazil, Venezuela, and Colombia and concluded:

We commit to pray and act in concrete solidarity for all who are affected by war and injustice, so that hatred is abandoned, and so that polarization and violence do not grow. We understand that it is a long road to justice and that the paths of peace are not easy to tread, but we as the Executive Committee of the WCRC call on all our member churches to live in obedience to a God of life and commit to the transformation of the world for the fullness of life for all. We commit to move From Life, For Life: Transforming, Reconciling and Renewing.

During the Executive Committee meeting, which was held 10-16 May, the WCRC also issued specific statements calling for prayer and solidarity in the wake of attacks on churches in Indonesia, condemning the Israeli violence in Gaza and welcoming the Panmunjom Declaration for Peace, Prosperity and Unification of the Korean Peninsula.

The Executive Committee also adopted a new strategic plan to guide its work in the coming six years.